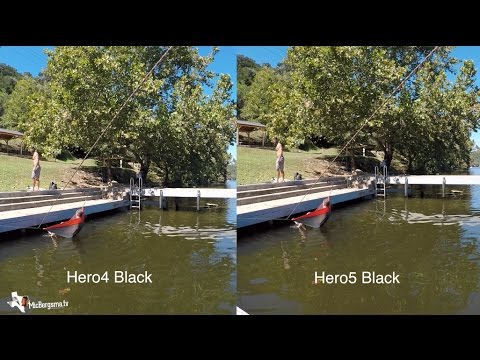 If you’re trying to decide whether to upgrade to the new GoPro HERO5 Blackfrom the previous model or have found a good deal on the HERO4 Black and aretrying to decide which to get, here’s a rundown of how the two models aredifferent and how they’re similar.

Overall, the HERO5 takes the best features of the HERO4 Black and Silver andcombines them in a single camera while adding some interesting new featureslike voice control, video stabilization, a RAW photo format, automatic GPStagging, and automatic uploading to the new GoPro Plus cloud service.

So the HERO5 Black is slightly larger than a naked HERO4 Black without ahousing.

A built-in touchscreen display was one of the defining differences between theHERO4 Black and Silver-the Silver had it, the Black didn’t.

In the same way that the HERO4 Silver’s settings were easier to navigate on-camera thanks to the screen, I’ve found it to make a big difference in makingthe HERO5 Black much more user-friendly.

That means two things: it’s one less thing thing to be hassling with while you’retrying to shoot, and the overall package of the HERO5 Black comes in smallerthan the combination of a HERO4 Black and the Standard Housing.

Some accessories for the HERO4 will work on the HERO5 Black, but manywon’t.

The HERO5 Black does everything the HERO4 Black and HERO4 Silver do andthen quite a lot more.

One of the best things about the HERO5 Black is that GoPro reduced the MSRPto $399.99, where the HERO4 Black’s MSRP started at $499. And that is apretty compelling feature in itself.